Jerry Halasz Thursday 10 am to 2 pm 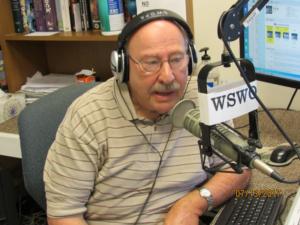 Some say I was vaccinated with phonograph needle.  As far back as I can remember,  I always wanted to be on the radio.  When I was a little kid, my grandparents had a big console radio in their living room and I used to listen to our local announcers on that radio.  I vowed, “someday my voice is going to come out of that thing”  and sure enough it did as I was an announcer at the high school FM station.  Later on I was an announcer and DJ at one of the commercial stations in South Bend, Indiana where I grew up.  ( some say I never grew up )  from there I worked at some of the Chicago suburban stations where I Emceed lots of record hops & concerts in Joliet, Illinois.  Jim Sohns of the “Shadows of Knight” was a regular visitor to my show.  His big hit was “Gloria” which is on the oldies 97.3 playlist.  I also Emceed a hugh show with “Sam the Sham” in Joliet.  From there I worked in Dekalb, Illinois and did remotes from the dorms and fraternities and sororities on the campus of Northern Illinois University.  In 1972 I left radio for the waste hauling and recycling business.  I was transferred to Dayton to become sales manager of one of the huge national waste hauling firms.  I called on WING to secure their business and the program director heard me speaking with the chief engineer and said, “my you have a pleasant voice…are you available weekends?”  I finally retired and now…here I am at oldies 97.3 each Thursday from 10am to 2pm playing the hits.